This Software is Abandoned

You should be installing and using Wings in production environments with Pterodactyl Panel 1.0.

If your provider makes use of Virtuozzo, OpenVZ (or OVZ), or LXC then you will most likely be unable to run the Daemon. If you are unsure what your host is using there are a couple of options. The easiest is to check their website, or reach out to their support team.

If you want to take a different approach, try using lscpu and checking what the virtualization type listed is. An example of this is shown below which shows my hypervisor running with full virtualization — this means it will support Docker without issues. If you see KVM for the vendor, chances are you're fine as well.

If that doesn't work for some reason, or you're still unsure, you can also run the command below and as long as it doesn't report Xen or LXC you're probably okay to continue.

Pterodactyl's Daemon requires the following dependencies be installed on your system in order for it to operate.

For a quick install of Docker CE, you can execute the command below:

If you would rather do a manual installation, please reference the official Docker documentation for how to install Docker CE on your server. Some quick links are listed below for commonly supported systems.

Please be aware that some hosts install a modified kernel that does not support important docker features. Please check your kernel by running uname -r. If your kernel ends in -xxxx-grs-ipv6-64 or -xxxx-mod-std-ipv6-64 you're probably using a non-supported kernel. Check our Kernel Modifications guide for details.

If you are on an operating system with systemd (Ubuntu 16+, Debian 8+, CentOS 7+) run the command below to have Docker start when you boot your machine.

On most systems, docker will be unable to setup swap space, you can check if this is the case by running docker info. If it outputs WARNING: No swap limit support near the bottom, this is the case. Enabling swap is completely optional, but we recommended doing it if you will be hosting for others, and to prevent OOM errors.

To do so, open /etc/default/grub as a root user, and find the line starting with GRUB_CMDLINE_LINUX_DEFAULT. Make sure the line includes swapaccount=1.

After doing that, simply run sudo update-grub followed by sudo reboot to restart the server and have swap enabled. Below is an example of what the line should look like, do not copy this line verbatium, it often has additional OS specific parameters.

NodeJS is also super easy to install! Simply run the command below to make the package accessible to your system.

This Software is Abandoned

You should be installing and using Wings in production environments with Pterodactyl Panel 1.0.

The first step for installing the daemon is to make sure we have the required directory structure setup. To do so, run the commands below.

If you are using a server provided by OVH or SoYouStart please be aware that your main drive space is probably allocated to /home, and not / by default. Please consider using /home/daemon-data for server data. This can be easily set when creating the node.

The next step is to download the software and unpack the archive.

Finally, we need to install the dependencies that allow the Daemon to run properly. This command will most likely take a few minutes to run, please do not interrupt it.

Once you have installed the daemon and required components, the next step is to create a node on your installed Panel Once you have done that there will be a tab called Configuration when you view the node.

Simply copy and paste the code block and paste it into a file called core.json in /srv/daemon/config and save it. You may also use the Auto-Deployment feature rather than manually creating the files. 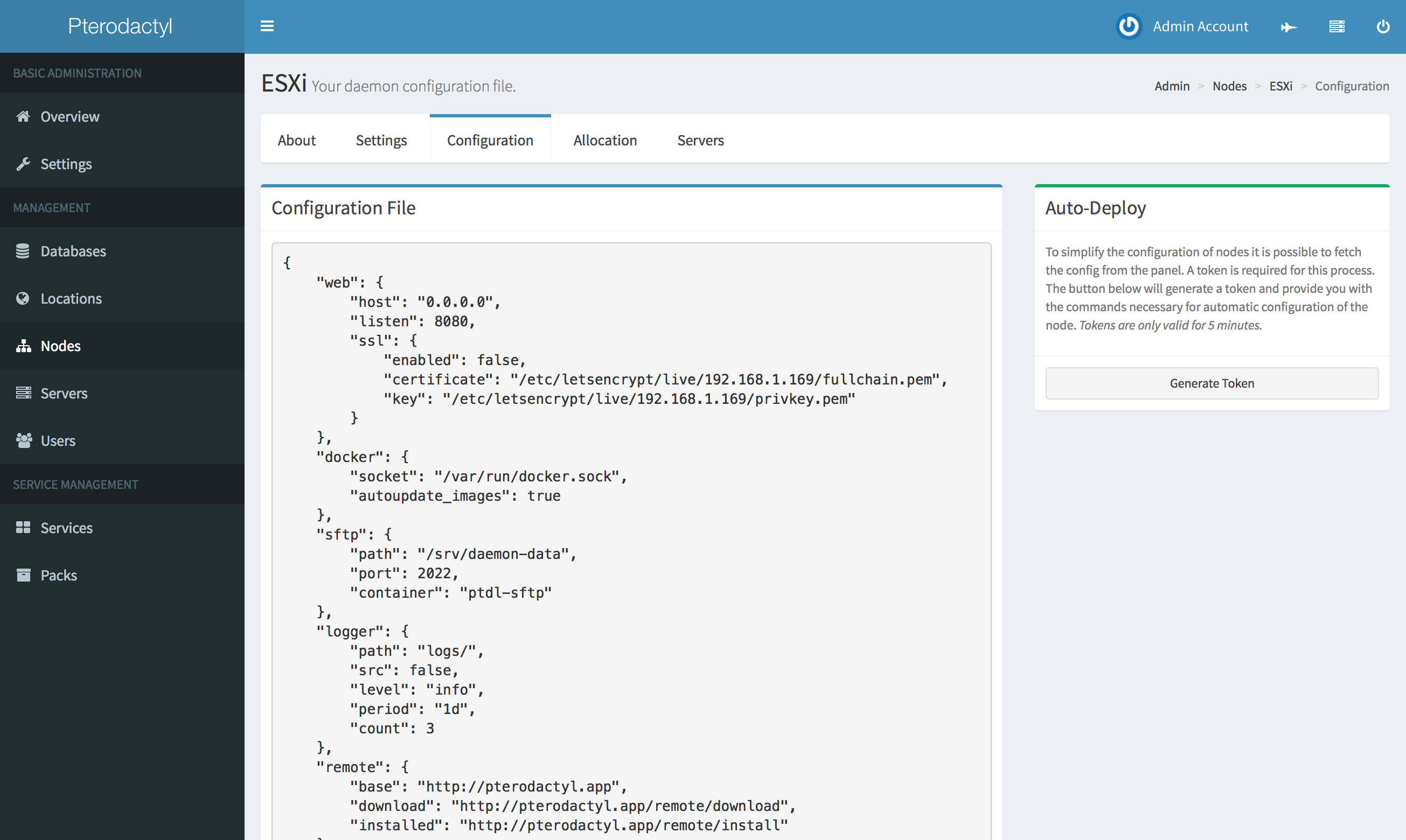 To start your daemon simply move into the daemon directory and run the command below which will start the daemon in foreground mode. Once you are done, use CTRL+C to terminate the process. Depending on your server's internet connection pulling and starting the Daemon for the first time may take a few minutes.

Running Pterodactyl Daemon in the background is a simple task, just make sure that it runs without errors before doing this. Place the contents below in a file called wings.service in the /etc/systemd/system directory.

Then, run the commands below to reload systemd and start the daemon.